We are on the road!  The bikes are loaded and we are rolling. West Virginia, currently. 42 degrees and climbing! 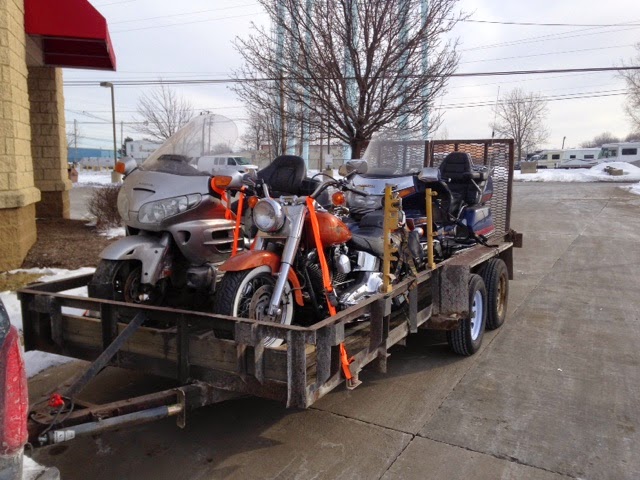 Posted by Vince Herman at 11:13 AM No comments:

Got my packing done. And I really mean that my Marion packed while I picked out me socks. :)
I am ready to roll out for Florida tomorrow.
Ron's work on getting the trailer finalized was hampered by several things. My sister, his wife, is sick. My niece, his daughter, just took possession of her house. Tonight. With the gas turned off and temps below zero. It sounds like he has most of it wrapped up. Just a few last minute things (he did get a spare tire for the trailer).
Tomorrow, we will head down. I feel like a kid the night before Christmas.
Posted by Vince Herman at 8:11 PM No comments: 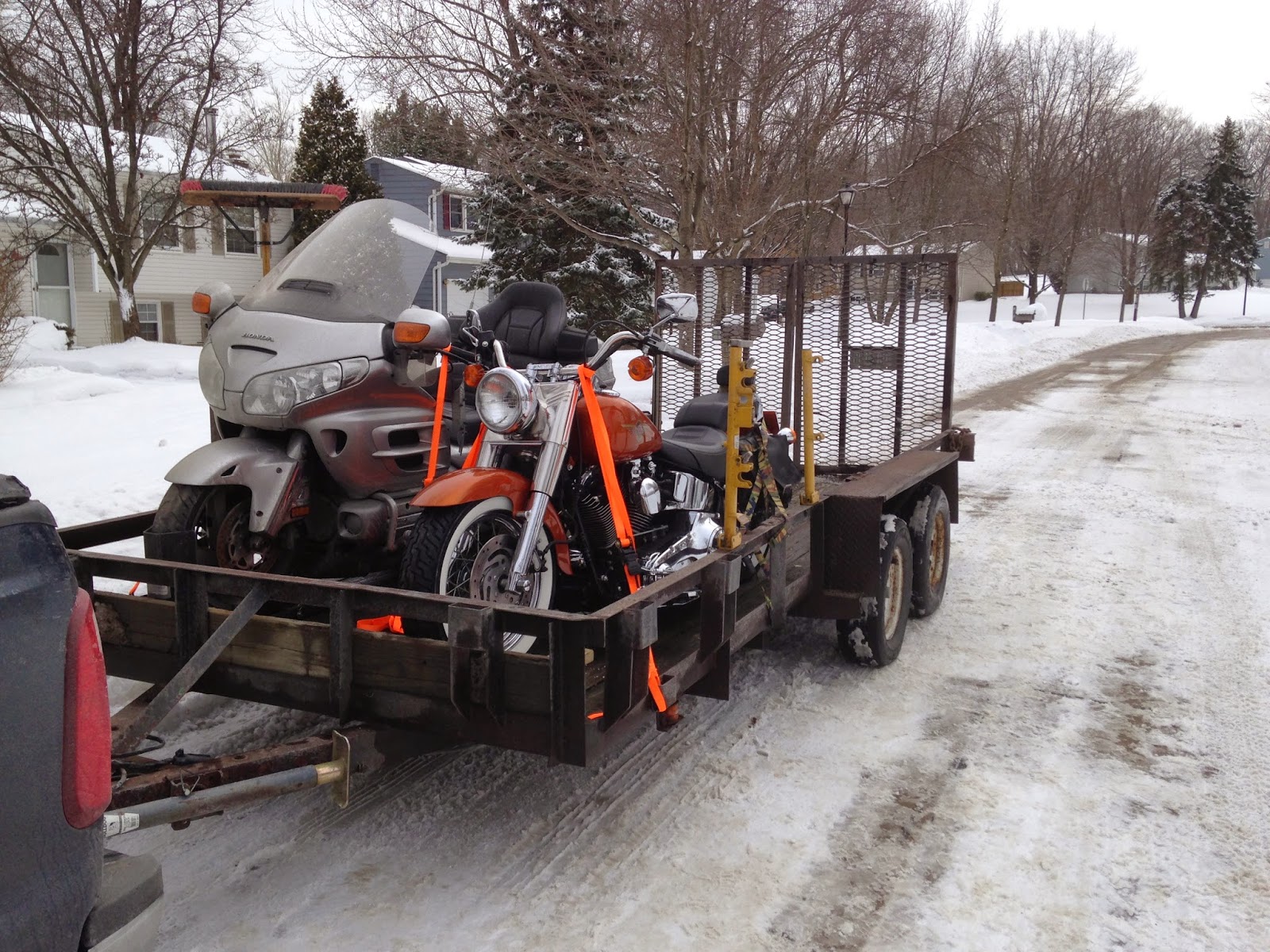 Ron spent Friday prepping his brother's trailer for the trip.  First they had to drag it out of the snow and in to the barn, then the work on the trailer itself could start.  Check that the lights work.  Re-mount the tie down points. Purchase new straps.  Sunday, we hooked the trailer up to the truck and made a loop to pick up the bikes.  To the left, you can see two down and one to go.  We have my Gold Wing and Shawn's Harley loaded up.  I really wanted to ride my bike up and down the street just to say I did it, but there was too much ice on the road.  Oh well, off to Ron's to get his Gold Wing. 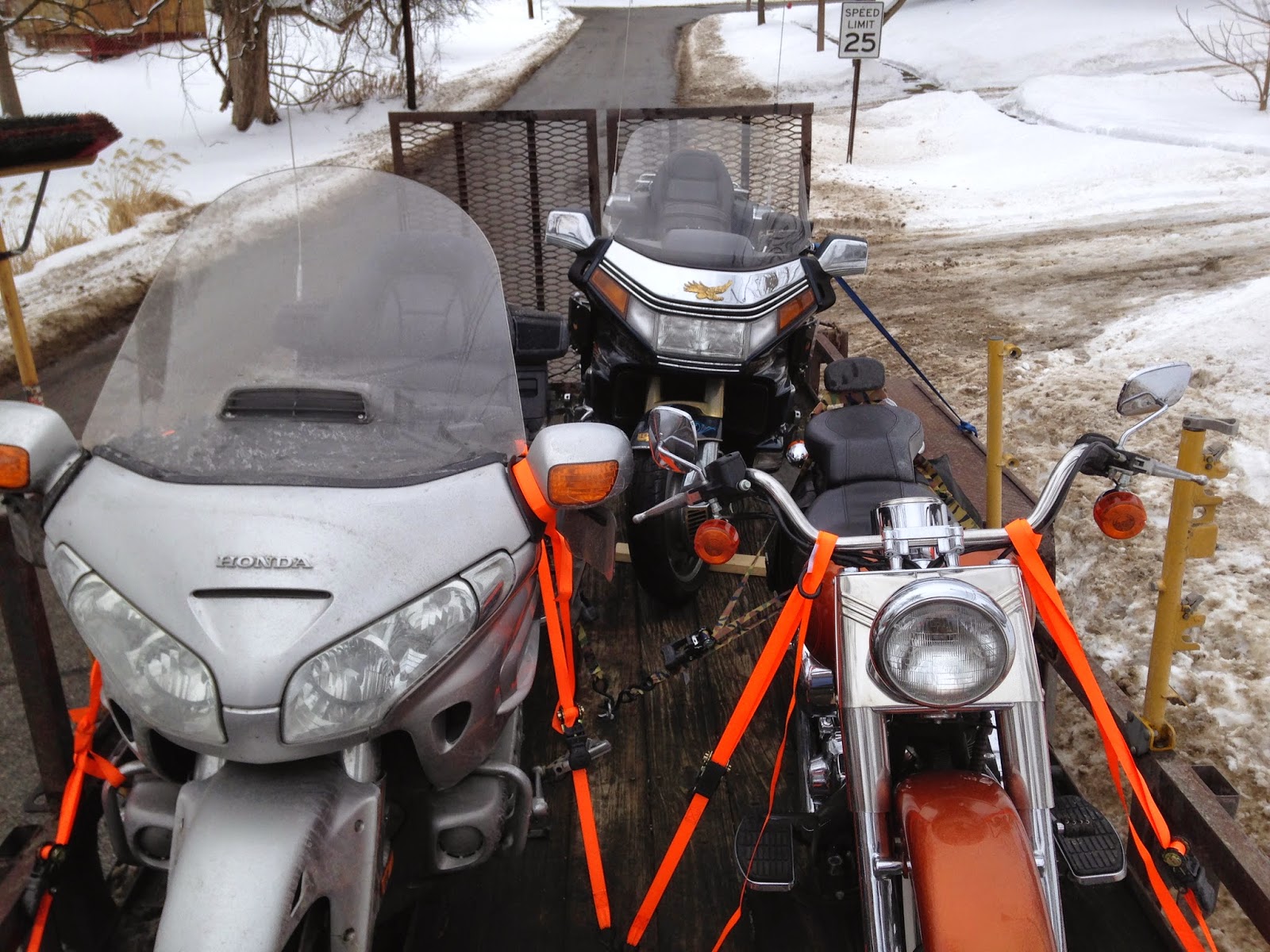 On the right, we have we have the picture I wanted to see - all loaded and ready to go.  The picture does not really show it, but Ron's driveway is down hill, enough that we were worried about a motorcycle 'fail' moment on the ice.  We got it down the drive in once piece and Ron rode it up the street to turn around.  He rode it up the ramp and we had all three bikes loaded.  But as things happen, Ron's bike is suffering from brake problems.  The rear brake is hanging up.  Well, the bike is already on the trailer, let's take it over to Cycles R Us in Chippewa.  Diagnosis?  Caliper, piston and seals for the rear.  Maybe new pads will be enough for the front. (What?  Your motorcycle shop service manager does not make Sunday appointments?  It helps that he is my brother.)  :-)

Sourcing parts for an old Gold Wing is easy enough, just not quick.  After market places can overnight the parts if they have them.  If the parts can get in by Wednesday, we should have the bike ready to go for out Saturday morning departure.  But we need to consider some alternate plans.

We'll see how this goes.


Posted by Vince Herman at 8:15 AM No comments: 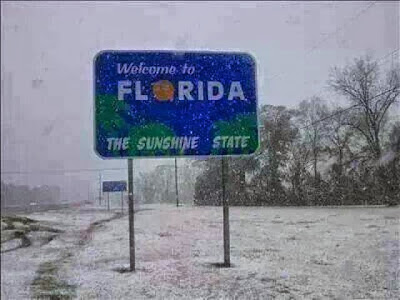 No.  NO.  NO!!!!  We are going to Florida to get AWAY from the snow!  Well, Key West will be warmer.  :) On the good side, my truck has been delivered.  Ron is working on getting the trailer set up.  Almost time to pack the clothes and sundries.
Posted by Vince Herman at 8:13 PM No comments:

Vince Herman
I have a wife (Marion), 2 grown kids (Rob and Molly) and life is good. By good, I mean mostly go to work and pay bills, but I DO get to ride my bike, play games with friends and enjoy RC activities with my family and other club members (and Marion!).